3 Up/3 Down is a new type of article feature here at Stat Box Stories which analyzes aspects of upcoming or already-released videogames for their strengths and weaknesses.  Today we take a look at the recently-announced Womens National Teams in EA SPORTS FIFA 16.

Opting to go the more traditional route and save much of its feature reveals for E3 2015 starting on June 15th, the only morsel of information that soccer/futbol fans have received so far regarding the upcoming EA SPORTS FIFA 16 is that the game will, for the first time in its history, feature female players.  With the 2015 FIFA Women’s World Cup beginning this month in Canada, it’s no surprise that this would be the lead-off feature reveal for this year’s title.  The full news reveal, along with a debut trailer featuring the new women of FIFA 16, can be found here.  Read on for my 3 Up/3 Down take on the news:

Simply put, if any major team sport needed to be representing the women’s side of the game, it’s soccer/futbol.  As the world’s game, it’s a sport embraced by cultures all over the globe and played by both men and women at high-skill, professional levels.  The sport is experiencing a resurgence in popularity in the United States as well–themselves winners of two FIFA Women’s World Cups–so there has never been a better time to make the extra investment of development time and expense to bring women to the game.  The EA SPORTS interviews regarding the feature thus far have also spoken to the inclusion of women being oft-requested by fans  of the series, so it’s a good win by the development team on that front as well.

Despite the added power of the PlayStation 4 and Xbox One consoles, body types in FIFA 14 and FIFA 15 are still coming along a bit slowly, despite being cleaner than many other sports video game character models.  Through taking the time to scan in faces and motion-capture long hair and body types of various heights and sizes, as was done with many of the top female players for this new addition, the default FIFA game engine will hopefully benefit from the new body definitions and physics determinations, allowing the men of the game to receive greater variation and attention as well; not just this year, but in future iterations of the title. 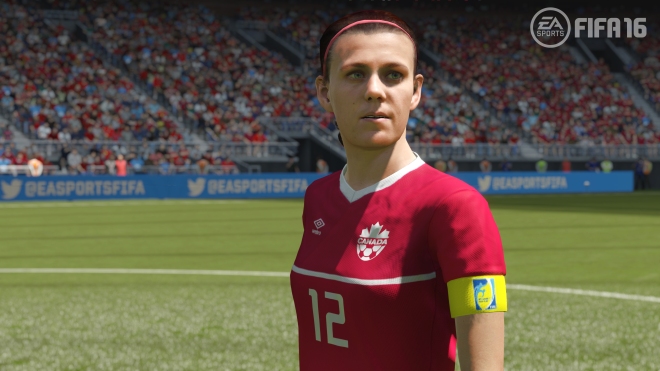 It’s a significant step to get women in the game at all, and now that there has been an investment in this as a feature, the developers at EA SPORTS should have a clear future path for how to expand the inclusion of women in games down the road.  The first step should be to continue scanning in the most recognizable players and adding more international squads to the game, but from there it’s clear that professional women’s leagues around the world need to be added as well, and the popular FIFA Ultimate Team mode needs to take strides to support this new influx of players into the game to take advantage of that diversity.

On one hand, it almost feels unfair to complain about what hasn’t been included when it apparently took such effort to get women into FIFA 16 in the first place.  That being said, the first crack at including women in the game does have limitations, including only featuring 12 national teams, 11 of which qualified for the 2015 FIFA Women’s World Cup.  Unfortunately, the game lacks the defending FIFA Women’s World Cup champion Japan, although this is more an issue with FIFA in general because the only games that feature the country’s national teams are the specific World Cup titles, for licensing reasons.  Though it was unrealistic for anyone to assume the inclusion of even a single professional club league on the women’s side, only having twelve teams to choose from makes it difficult to imagine gamers spending all of their FIFA 16 time in this new feature.

The women’s national teams available for FIFA 16 include:

Here’s the other rub: even though the news release about this feature has come around just in time for the start of the 2015 FIFA Women’s World Cup in Canada, there won’t be any specific tie-in to the quadrennial tournament in FIFA 16.  Again, it’d be hard to expect the developers to put together 24 teams (up from 16 at the last Women’s World Cup) of players, particularly with the game’s release coming many months after the conclusion of this year’s tournament.  And I don’t think anybody would’ve legitimately expected the depth of features and options available in a full-fledged World Cup title like what EA SPORTS typically puts together, again due to the time crunch and this being a first effort towards adding women to the game.  At the end of the day, however, the Women’s World Cup is one of the biggest opportunities for fans to experience the women’s side of the game, and lack of any type of inclusion of this event with the addition of female players to FIFA 16 will again make the feature difficult to stick with for a long stretch of time. 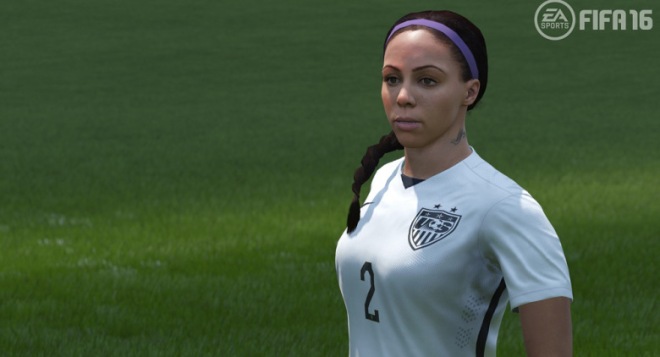 The first two points in 3 Down have indirectly spoken to this already, but altogether there is a difficulty with this new feature in FIFA 16 having no immediate long-term hook to engage players.  This is unfortunate, as it may have the side effect of lower engagement in terms of measurable metrics for the development team when they review FIFA 16 as it is being played in the wild and try to see whether or not the player used the requested feature enough to justify future development.  With a solid investment of time, money, and effort this year, the goal needs to be for FIFA to have a long-term plan for how the women’s side of the game can be better represented across all game modes and not just in the current offerings of Match Day, Offline Tournament Mode, and Online Friendlies solely allowing women’s teams playing against one another.  It’s always a pain to have to look another game into the future when the next game hasn’t been released yet, but for FIFA 17 one has to think that the goal should at least be to include more national squads so that the number of female players represented in the game allows for the ever-popular FIFA Ultimate Team mode to incorporate women.  Establishing some of the top women’s leagues would help this as well; perhaps the game could even establish a “Sporting Director” career mode for squads featuring men’s and women’s teams so that a die-hard fan could control all sides under their favorite team’s umbrella and try to win as many trophies as possible in multiple competitions.  The future is bright and has many different possibilities for how women can continue to develop inside EA SPORTS FIFA and how that can impact the game at the macro-level, so long as the commitment is there from both the development side and from the player side to make it worthwhile.

EA SPORTS FIFA 16 is due for release on the Sony PlayStation 4, Microsoft Xbox One, PlayStation 3, and Xbox 360 on September 25th, 2015.  With women making their official gaming debut for the top-selling series, let me know your thoughts in the comments below!