With this entry, we come to the end of the 2012-2013 Bowl Blitz Invitational.  As with the Top 10 Team article, this entry is short on words but gives you the Top 10 Player results in 33 different statistical categories which were tracked over the course of this year’s project.  Read on to see which players performed at the highest (and lowest, in terms of statistics like turnovers) level over this year’s 35 Bowl Games!

END_OF_DOCUMENT_TOKEN_TO_BE_REPLACED

On this, the final day of entries for the 2012-2013 Bowl Blitz Invitational, we’re going out with few words but plenty of statistical reporting to consume.  This entry gives you the Top 10 Team results in 30 different statistical categories which were tracked over the course of this year’s project.  Read on to see which teams performed at the highest (and lowest, in terms of statistics like turnovers) level over this year’s 35 Bowl Games! 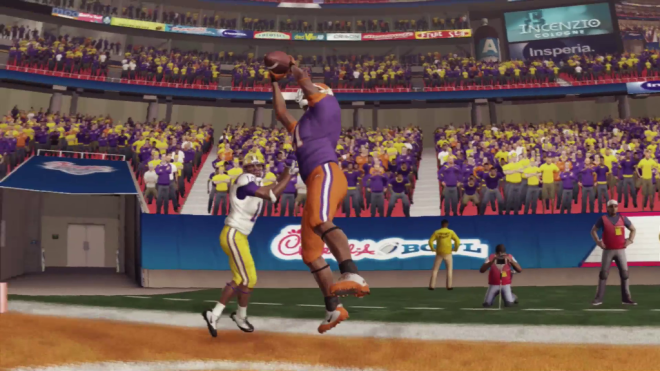 END_OF_DOCUMENT_TOKEN_TO_BE_REPLACED

One thousand, eight hundred, seventy-three… that’s the number of points scored in the entirety of the 2012-2013 Bowl Blitz Invitational, 70 teams over 35 Bowl Games in one Bowl Season.  With special attention paid to scoring plays in the tracking of this year’s games as compared with last year’s project, we are very excited to share with you the details of how the points ended up on the scoreboard in this year’s project; read on for all of the details!

END_OF_DOCUMENT_TOKEN_TO_BE_REPLACED

With the conclusion of Bowl Season last night and the Alabama Crimson Tide’s victory over Notre Dame in the BCS National Championship Game, the game article portion of the 2012-2013 Bowl Blitz Invitational has finally come to a close.  That said, the project continues on this week, and we will be sharing multiple articles recounting all of the statistical data that has been collected over the 35 Bowl Games played over the past month.

The first matter of business, however, is to analyze the “game within a game” here at the Bowl Blitz Invitational; each game is given a “Game Score” based on how close the NCAA Football 13 playthrough score came to the actual real-life result.  The person responsible for playing the game with the lowest “Game Score”—the lower the score, the closer the game came to matching the real-life final—is crowned “Bowl Blitz Invitational Champion,” a largely ceremonial title to recognize whoever managed to most closely replicate reality in the wholly unscientific process of playing a video game.

Last year, Eric Veneziano became the inaugural “Bowl Blitz Invitational Champion” with a Gator Bowl result that earned a “Game Score” of 2; read on to find out who emerged victorious this year!

END_OF_DOCUMENT_TOKEN_TO_BE_REPLACED

The 2012 Kraft Fight Hunger Bowl features a matchup of the Navy Midshipmen (8-4) and the Arizona State Sun Devils (7-5, 5-4 Pac-12). gschwendt of The Gaming Tailgate took the reins of the Navy Triple Option attack to see if he could take down the Pac-12 foe.

END_OF_DOCUMENT_TOKEN_TO_BE_REPLACED

Almost exactly one year ago, a wild idea was hatched here at STAT BOX STORIES to get people to volunteer to play EA SPORTS NCAA Football 12 and report on every match-up of the college Bowl Season.  When that project started, there were no guarantees that it would be successful; when the BCS National Championship Game was played on January 9th, 2012 between Alabama and LSU and all 35 Bowl Games had been successfully completed, it was an unexpected achievement.  The efforts of so many people who had nothing to gain from their participation but to say that they were part of something helped the Bowl Blitz Invitational become a project worth repeating, and it is now just about time for the sophomore year to start.

This year, the core goals remain the same: volunteers have been gathered, Bowl Games have been claimed, and gaming consoles around the country are booting up NCAA Football 13 to play the games and report the results.  Game statistics are being tracked in real-time, and as the real-life games are contested every play-through on the site will be matched up against those results to see which participant was able to most closely mirror reality.

One difference readers will notice is an emphasis on reporting each game as though it were an actual football game being contested; not just a video game played on an Xbox 360 or PlayStation 3.  Volunteers have been encouraged to report even more statistical tidbits than last year, building from the editorial template of ESPN.com’s college football game summaries to bring about a more consistent theme in the writing across this year’s 35 entries.  Along with this new format, the familiar box scores, scoring summaries, team statistics, and player statistics will be present, along with screenshot and video highlights captured both using the in-game tools offered by NCAA Football 13 as well as through more sophisticated avenues such as HD video recorders.

With increased development in the ability to track statistics as the games are played this year, readers can look forward to an even more robust series of entries after the BCS National Championship Game is played between Alabama and Notre Dame on January 7th, 2013.  With statistics and statistical analysis such a large part of what inspired the creation of STAT BOX STORIES in the first place, the goal for the 2012-2013 Bowl Blitz Invitational is to improve upon every aspect of the statistical breakdowns offered in last year’s project.  For the next month and a half (and beyond), you won’t want to miss a single day of content as we celebrate college football and the 70 teams which have been invited to play a part in writing the story of the 2012-2013 Bowl Season.

The games begin this Saturday, December 15th, with the Gildan New Mexico Bowl (Nevada versus Arizona) and the Famous Idaho Potato Bowl (Toledo versus Utah State).  Our coverage here at STAT BOX STORIES for the Bowl Blitz Invitational begins Friday morning, December 14th, with the posting of the write-up for the 2012 Gildan New Mexico Bowl.  Here is the rest of the content schedule (all entries will be uploaded by 8:00AM ET on the date specified):

We sincerely hope that you are as excited as we are here at STAT BOX STORIES for the start of Bowl Season and the 2012-2013 Bowl Blitz Invitational; be sure to visit the “official” discussion thread at The Gaming Tailgate (http://www.thegamingtailgate.com/forums/showthread.php?6217-Introducing-the-2012-2013-Bowl-Blitz-Invitational) to follow along with the results as they are made available, and be sure to keep coming back to STAT BOX STORIES as the games get played!

As Week #6 of STAT BOX STORIES draws to a close, it has been an exciting week for the blog project; not only did we have the usual four entries using Madden NFL 12, NHL 12, FIFA 12, and NCAA Football 12, we also had the first guest entry from Eric Veneziano using NHL 12.  If you missed any of the entries this week, follow the links below:

Last week, we debuted the first Guest Entry here at STAT BOX STORIES; this week, I’ll be matching up with some of my EA SPORTS Game Changers brethren in an Online Team Play showdown using Madden NFL 12 online.  You won’t want to miss this match-up in the first game competed between human players for the STAT BOX STORIES blog project.

The advent of college football bowl season also means that this week’s NCAA Football 12 entry will stage a bowl game, as well the featured NCAA Football 12 entries for the next few weeks through the BCS Championship Game; we’ll get things started with the Gildan New Mexico Bowl.

And, if you haven’t done so yet, head over to Facebook and “Like” STAT BOX STORIES here.  Being a “fan” of the Facebook page will grant you easy access to all of the entries, linked as soon as they are posted online.  You’ll also be able to be part of the STAT BOX STORIES community and engage with people who share a similar interest in sports video games and statistics.

And now, the usual preview of the coming Week #7 in STAT BOX STORIES:

Be sure to come back next week for another set of STAT BOX STORIES entries as we get into the 7th week of this series!