The 2012-2013 Bowl Blitz Invitational kicks off today with the Gildan New Mexico Bowl between the Nevada Wolf Pack (7-5, 4-4 MWC) and Arizona Wildcats (7-5, 4-5 Pac-12).  STAT BOX STORIES owner Brian Parker took control of Nevada in their bid to upset a team from a BCS Automatic Qualifying conference.

Albuquerque, N.M. – The 2012-2013 NCAA Bowl Season started off in earnest with a double-overtime thriller between Nevada and Arizona in the Gildan New Mexico Bowl, with the Wildcats edging the Wolf Pack on an 12-yard touchdown run by WR #11 in their second possession of extra time.

The Pac-12 representative in this yearly Bowl Game took a 24-10 lead at halftime thanks to two touchdown passes within 17 seconds; Arizona QB #9 found HB #3 for a 6-yard touchdown to go up 17-10, and then Nevada QB #17 threw an ill-advised interception on the next play from scrimmage to set up a 36-yard Arizona touchdown pass to TE #83.  The Wolf Pack managed to set up a red zone possession after a 45-yard completion, but with 2 seconds remaining in the half they opted to forego the field goal try; an incompletion in the end zone kept the halftime deficit at 14 points. 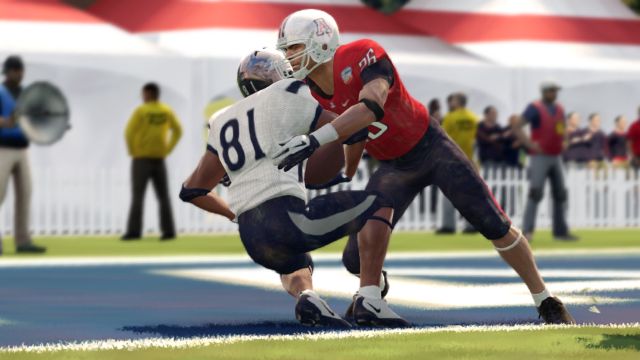 Nevada’s comeback began late in the third quarter with a 29-yard touchdown pass to WR #12, followed early in the fourth quarter by a 10-yard touchdown pass to WR #81 and a tie game at 24-all.  Arizona drove into Nevada territory but settled for a field goal with under two minutes remaining; the Wolf Pack drove down the field themselves on the ensuing possession, setting up a 26-yard field goal attempt with one second remaining to tie the game at 27.

The Mountain West Conference squad won the coin toss to begin overtime, opting to defend first and holding Arizona to a 29-yard field goal.  Nevada was in the driver’s seat knowing that a touchdown would end the game, but after getting stopped at Arizona’s 2-yard-line, the Wolf Pack took the conservative play-call and kicked a 19-yard field goal on fourth down instead of trying for the end zone.  Arizona’s defense stepped up and held Nevada to negative yardage in their second overtime possession, forcing a 38-yard field goal try to get the Wolf Pack three points up.  On the third play of Arizona’s second possession, the wide receiver run from 12 yards out sparked celebration on the Wildcats sideline and crowned the first winner of the Bowl Season.

Nevada’s HB #25 represented much of the Wolf Pack offense, rushing 35 times for a total of 207 yards and a touchdown.  In spite of his strong performance, multiple injuries over the course of the game relegated him to spectator status during the overtime possessions.  Arizona QB #9 had the better day of the two signal-callers, completing 72% of his passes for 2 touchdowns and no interceptions.

Player of the Game: Arizona HB #3, who carried 17 times for 138 yards and a rushing touchdown, while also scoring on a 6 yard reception.

It was over when… Arizona WR #11 broke a 12-yard run in the second OT after the Wildcats defense forced Nevada to settle for a long FG on their possession.

Stat of the Game: 2.  Nevada’s quarterback threw two interceptions—including a “game changer” at the end of the first half to allow Arizona to build a 14-point halftime lead.  Arizona, on the other hand, committed no turnovers.

Statistical Tidbits: The two teams combined for 840 yards of total offense; 532 of which were on the ground as the teams combined for 98 rush attempts. … Despite Nevada HB #25’s big day, he was still 78 yards shy of the New Mexico Bowl’s individual rushing record of 285 set in the 2008 game. … Neither team surpassed 175 yards passing, yet each team scored twice via the air attack. … The Wolf Pack were perfect on fourth down conversions—2-for-2 with one conversion resulting in a 29-yard touchdown pass in the third quarter—while Arizona went 0-for-1. … Nevada held possession for 8:22 longer than Arizona, but the end result was still a crushing loss after fighting back to force extra football. 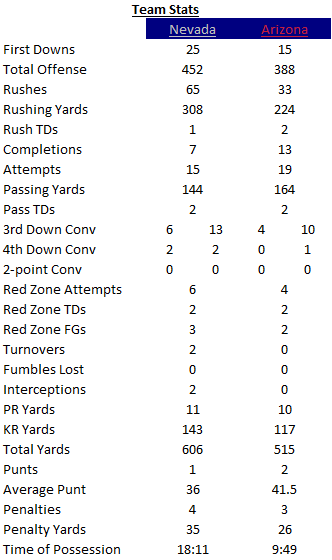