One of today’s guest entries features one of the newest Bowl Games in the college football landscape: the 2011 New Era Pinstripe Bowl, which is in only its second year of being played at Yankee Stadium.  EA SPORTS Game Changer David Searles–better known on Xbox Live as RedZoneD25–takes control of the Scarlet Knights of Rutgers against the Iowa State Cyclones.

The Iowa State Cyclones were believed to be a team on the rise heading into 2011, though one that has the adversity of being in a conference loaded with teams with BCS aspirations. In other words, the complete opposite of the Rutgers Scarlet Knights, who were assumed to be back to their doormat ways in a weak conference after losing many key players over the past two years.

Though both teams finished unranked in the polls, they were successful enough to receive an invite to the 2011 Pinstripe Bowl. Unfortunately, this stadium is not in NCAA Football 12, so we’ll be playing the game at a High School stadium in Orlando, Florida with similar weather settings to what the forecast is for gamete in New York City. 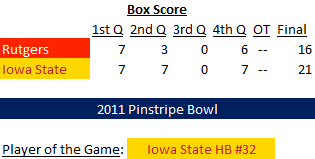 Iowa State won the opening coin toss, yet elected to defer to the second half and give Rutgers the first crack at scoring…they didn’t. Before you could blink your eyes, the Scarlet Knights were sacked, and just two plays later QB #19 heaved the ball downfield only to see it come down in the hands of Cyclones MLB #47.

Following the INT, Iowa State showed off their perfect usage of the no-huddle offense which ended up being enough to throw Rutgers off their game. QB #11 capped off a 5-play, 46 yard drive with a 5 yard scamper up the gut for the first touchdown of the Pinstripe Bowl.

On the next drive, Rutgers managed to come alive and forget about the previous turnover as 74 yards later our game was tied on a nice route in which Rutgers WR #18 was able to break away from his lone defender and cash in for a score.

Throughout the remainder of the first quarter and majority of the second, the two teams traded defensive stands as the crowd sensed that soon the proverbial “dam” could bust open. Luckily for fans of Rutgers, their break came early on a forced fumble with 1:52 left in the first half. The ensuing drive failed to get a first down, but was enough for a 38 yard field goal to grab a 10-7 lead going into halftime…right?

Iowa State isn’t done yet, and a 36 yard kick return sets up the Cyclones with just over a minute left and good field position. An anemic Rutgers defense proceeded to constantly be caught out of position, highlighted by a sad attempt at an interception that instead ended up as a 38 yard touchdown for Iowa State.

The remaining seconds of the second quarter saw Rutgers throw a desperation heave ending in another INT, sending the Scarlet Knights into halftime trailing 14-10.

The third quarter passed with no scoring, but tension was high and in the final minute Iowa State fans began to wonder what was in store as Rutgers CB #4 stopped what looked to be a sure-TD drive.

Remember the reference to a dam that was surely going to break at some point? Welcome to the fourth quarter of the 2011 Pinstripe Bowl! In just one play, the Iowa State Cyclones began to seal their opponent’s fate by overcoming great odds.

With just over three minutes to go in the game and leading by four, Iowa State begins this drive at their own 5 yard line thanks to a great catch by Rutgers’ special teams gunner. QB #11 took the snap in the shotgun formation and ran right to evade the wave blitzing linebackers. The ball traveled just far enough, though wobbling nervously the entire time, to be caught by HB #32 at the goal line. He ran the first 10 yards untouched, but then crashed into CB #4 and in about another 10 yards was barely able to break away from LB #20. In what can only be described as purely amazing, HB #32 ran directly down the right sideline being chased by SEVEN Scarlet Knight defenders all the way to the tune of a 95 yard Cyclones touchdown.

However, Rutgers missed the two point conversion, forcing their defense to have to make a stop quickly.

Mission accomplished. With just 52 seconds remaining in the Pinstripe Bowl, Rutgers was faced with being 80 yards away from a win and anything less from a loss. First play, incomplete. With 47 seconds left, WR #6 makes his presence felt with a 39 yard catch. Clock is running, so Rutgers uses no-huddle. Now with a fresh set of downs, Rutgers continues their quest down the field. First down, incomplete. Ditto for second down and now the clock stands at :29 and the Scarlet Knights are dealt a 3rd and 10. A great grab by WR #82 for 15 yards brings Rutgers closer, and again closer following a 17 yard catch (also by WR #82.)

With the ball halfway between the Iowa State 8 and 9 yard line and no time for second thoughts, QB #19 dropped back, waited momentarily to find an open receiver, closed his eyes and and then….

Game…over. Iowa State exhales, and the Scarlet Knights are forced to wonder what could have been as the Cyclones edge out Rutgers 21-16. 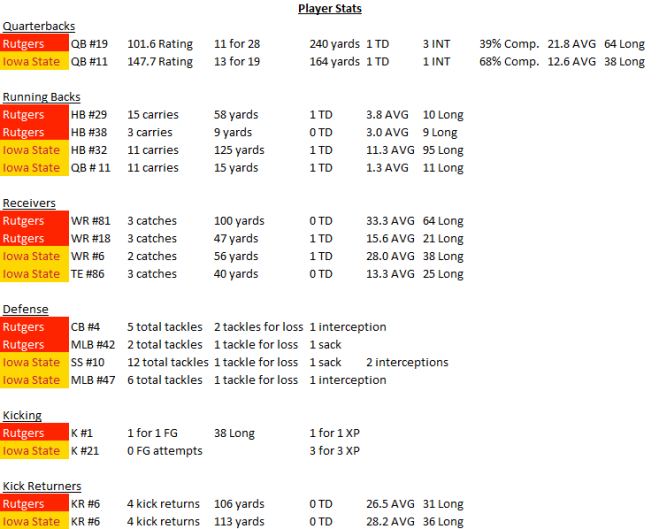 The Player of the Game was Iowa State’s HB #32; this man single-handedly crushed the dreams of thousands of fans with his feet, cruising for 125 yards on only 11 carries. While it is true that the majority of those yards came on his 95 yard rampage in the fourth quarter, that same play also provided ISU with their winning point total and that can’t be overlooked.

Even though the game wasn’t able to be played at Yankee Stadium in NCAA Football 12, it’s hard to find much to complain about with David’s playthrough of the 2011 Pinstripe Bowl after seeing it come down to the wire in a dramatic finish.  This is the busiest weekend of the college football Bowl Season, so be sure to come back to the site for more entries as the games continue!

David Searles wears many hats in the online video gaming world; he is a member of the EA SPORTS Game Changers program, an editor at StickSkills.com, a writer at GGRematch.com, and an Xbox Live Ambassador.  You can follow him on Twitter at @RedZoneD25.